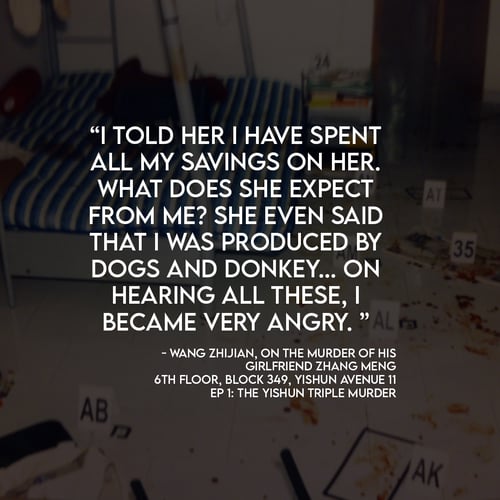 At 8 PM on 18th September 2008, a pair of lovers quarreled over having crab for dinner. In less than 4 hours, Wang Zhi Jian's girlfriend, Zhang Meng, her daughter, and their flatmate would be dead.

This was the aftermath of an intense relationship filled with emotions and lies. Zhang Meng had been married when they started their relationship. They wrote proclamations of love in blood and he had tattoos of her across his back and arms.

But their love also had a dark side - she threatened suicide whenever he tried to break up with her. They fought furiously and when he visited her in Singapore, she allegedly mistreated him:

This was until he had enough. ZhiJian stabbed Zhang Meng to death, before killing her daughter, her flatmate and wounding a fourth. In total, he used four different knives.

The three-room flat at Yishun Avenue 11 was a horrific crime scene - it was splattered with blood both within and on the walls outside. Was this an act of madness or cold calculation?