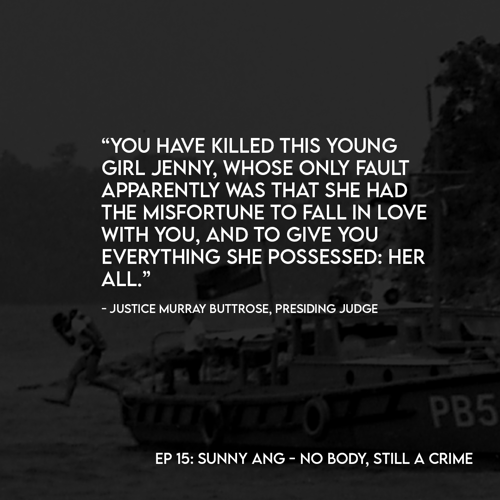 Sunny Ang was a man of many many talents, failed teacher, failed pilot, failed grand prix driver (even killing a pedestrian). He was a declared bankrupt and had been caught for burglary.

But Sunny was also smooth and suave, he was so slick that he managed to catch himself a pretty young thing - 22-year-old Jenny Cheok.

Jenny was a divorced bar-girl who only studied up to primary three. Sunny swept her off her feet and into the water with (maybe) the sharks.

On a diving trip on 27th August 1963, Jenny who could barely swim went into the water first. They were near Sisters Island which was known to be terrible for beginners because of it's strong currents.

After the first dive, Jenny popped out of the water - everything was going just fine. Sunny was on the boat 'checking' his equipment. At around 5PM, Jenny changed her tank and went into the water, never to be seen again...