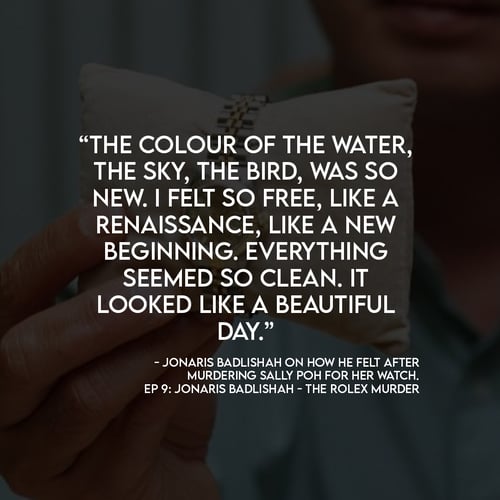 Jonaris Badlishah described his childhood as "a living hell". He was physically punished by his mother and stepfather and treated like outsiders by the family. His parents would refer to him and his brother as their 'nephews' and not sons in public.

As an adult he was boastful and regularly lied to keep up appearances. Including the lie that his girlfriend was an airline executive when in reality she was a prostitute.

On 19th April 1998, under the pretext of a job and using the pseudonym 'Nigel',  Jonaris lured make-up artist Sally Poh to the Marina South Bus Stop. He then bludgeoned her with a hammer and slit her wrists with a box cutter, to make sure she was absolutely dead.

This was all for a $7500 gold and diamond-studded Rolex watch.

The same day, he brought roses, cake, a bottle of whiskey and a very special present to celebrate his girlfriend's birthday at Lorong 18, Geylang...